The International Civil Aviation Organization (ICAO) Council agreed to proceed with the establishment of the Doha Flight Information Region (FIR) on the basis of a phased approach as presented in the Council’s report. This came during the 10th meeting of the Council in its 225th Session held this March 11.

The ICAO Council’s decision, which approved the dimensions of the Doha FIR/SRR, including revised dimensions of the Bahrain FIR/SRR, will be established in two phases; Phase One of the Doha FIR covers all the economic waters and land of the State of Qatar in addition to the international waters east of Qatar till the borders of the United Arab Emirates to an unlimited altitude. The airspace above the international waters north of the State of Qatar until the borders of the Islamic Republic of Iran will be controlled to an altitude of 24,500 feet above sea level. 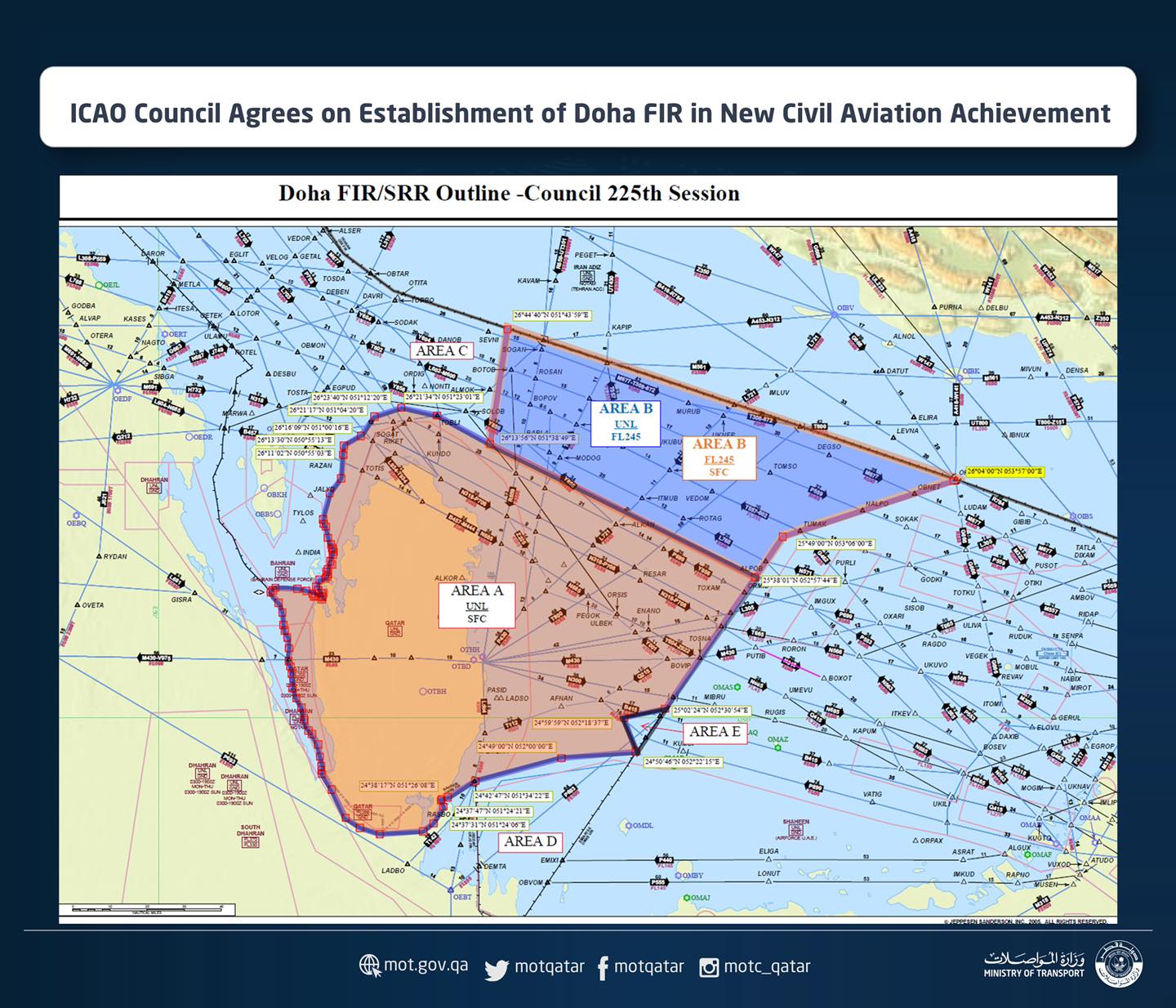 The Council agreed that within two years, upon successful implementation of the first phase, the second phase shall see all areas of the Doha FIR expanded to an unlimited altitude.

The Council also encouraged the States concerned to progress the proposal for amendment of the regional air navigation plans (MID ANP) and the establishment of Doha FIR based on the importance of good relations and collaboration between States to ensure seamless air services with a high level of safety and quality.

Noteworthy, the State of Qatar initiated its endeavor to achieve a Doha FIR/SRR back in 2018 until the issuance of the ICAO decision C-DEC223/9 where the Doha FIR/SRR proposal was agreed in principle.

On this occasion, Minister of Transport HE Jassim Saif Ahmed Al-Sulaiti appreciated the efforts of the ICAO Council in this regard and thanked the stance of the Member States that approved the proposal of Qatar, something that contributed to setting out a full plan for its implementation. He also expressed the State of Qatar’s appreciation of the ICAO for its efforts in service of the global civil aviation.

Qatar, he added, during implementing the first phase of Doha FIR, will be able add new air routes and increase the capacity of the aircraft waiting area in the air, in addition to increasing the area of search and rescue according to the FIR’s new dimensions, thus keeping pace with the development and achievements Qatar’s civil aviation is witnessing and based on the country’s clear right to achieve its own region.

He said that the civil aviation achievements in Qatar include developing the systems used in air navigation in line with latest global specifications, in addition to increasing the number of vital air routes within Qatar’s airspace in order to accommodate the requirements of large air traffic, thus demonstrating the unique performance of the services in the country.

HE the Minister added that Qatar has over the past years been stressing its firm belief in the rules and fundamentals that govern the relations between countries in the civil aviation community. Qatar is also proud of being a key and active contributor and player in that UN body. He said that Qatar will spare no effort in supporting the universal civil aviation industry to create an aviation sector that is safe, secure, sustainable and efficient. Minister Al-Sulaiti also affirmed that Qatar is looking forward to cooperation between all countries for the timely implementation of the decisions made, reaffirming as well Qatar’s commitment to safety and security of the civil aviation.

HE the Minister congratulated all those who work in the civil aviation sector in Qatar for the establishment of the Doha FIR/SRR, which is another accomplishment added to the record of accomplishments by the aviation system in general. He also lauded the considerable efforts done by the technical work team of Qatar and all those who worked on this effort to have this achieved. 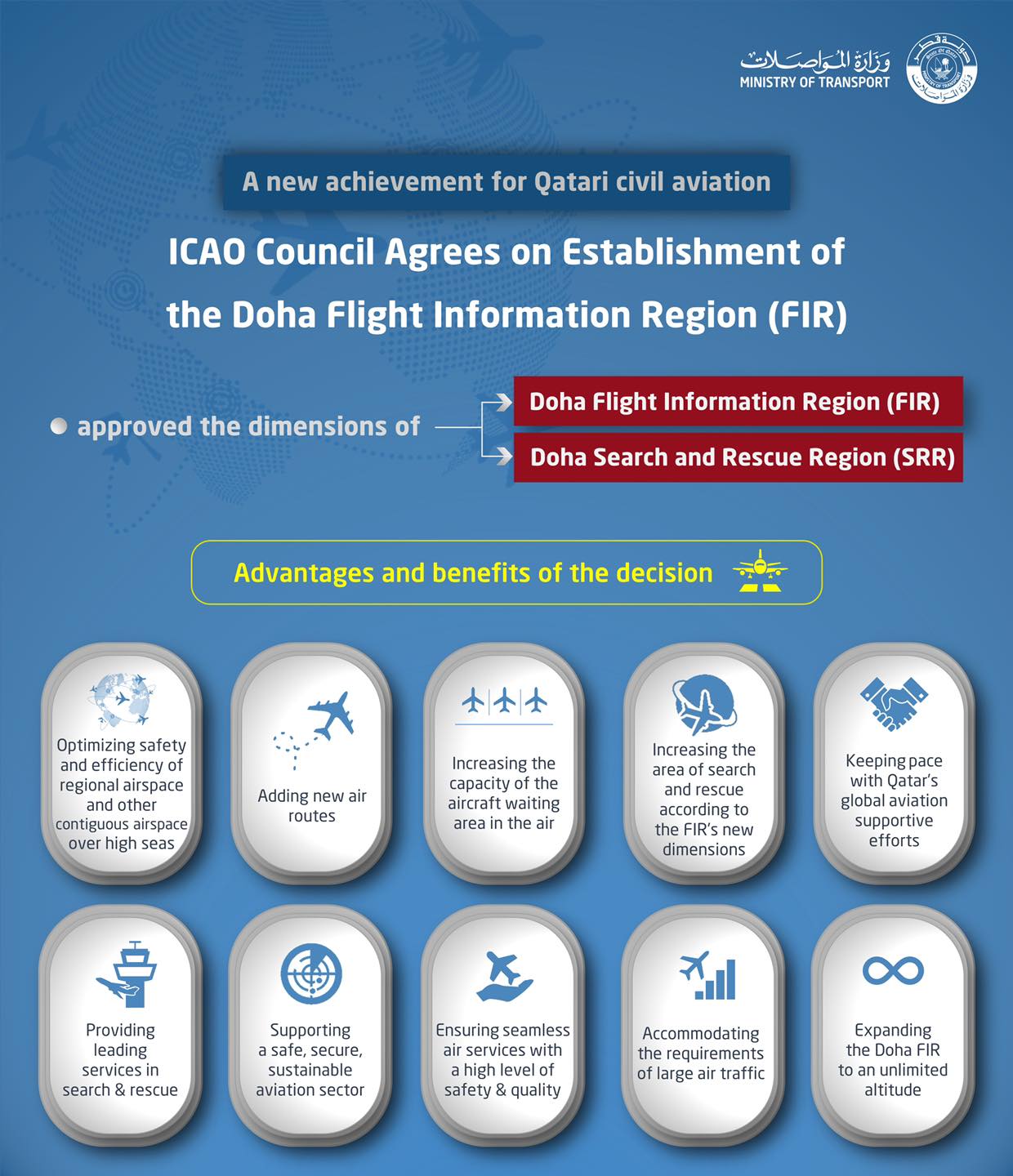